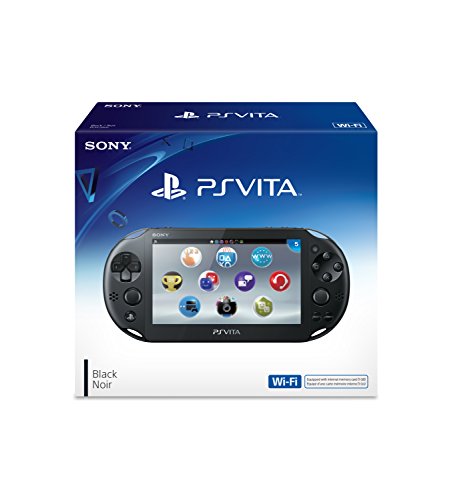 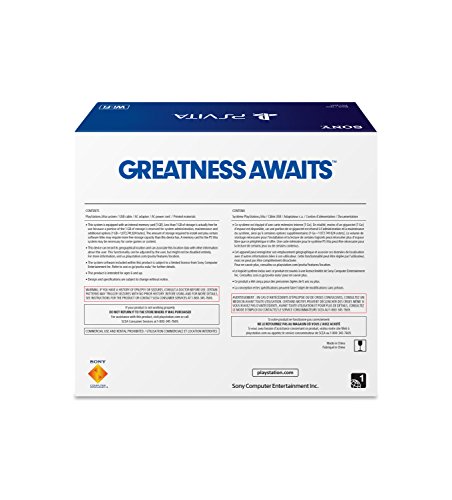 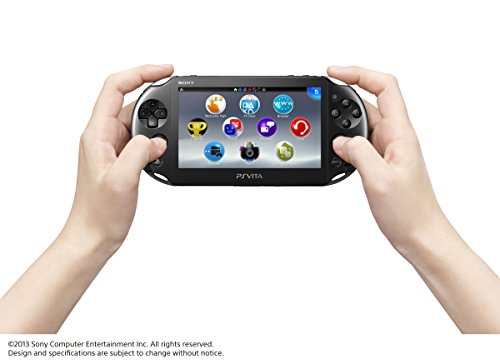 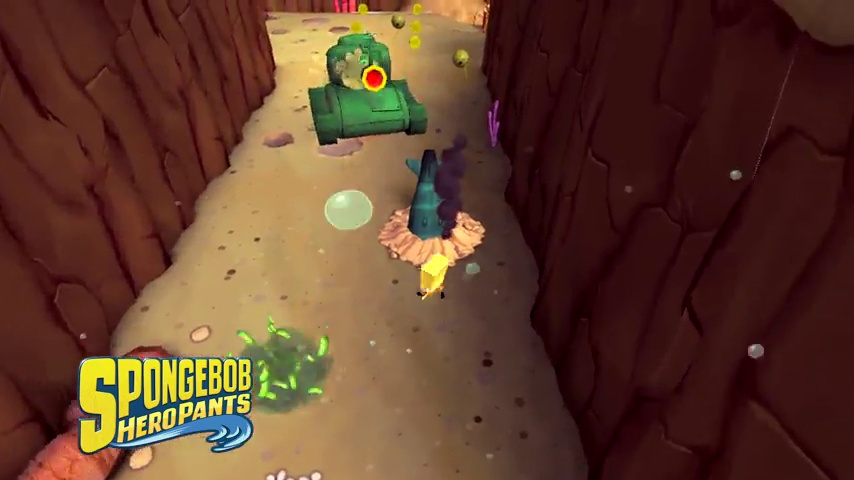 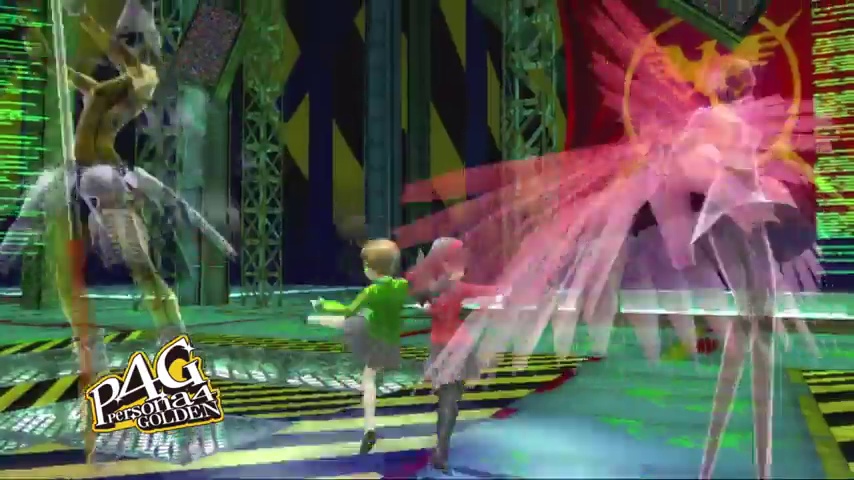 Worth every penny for brand new sealed boxed units!

If I could give my review a 10/5 stars I would! I purchased 2 BRAND NEW SEALED PS Vita Slims with 3.55 firmware from seller Above All Games with FBA (fulfillment by Amazon). Items came in USA/NA PCH-2001 black edition, all shiny and new with seals both top and bottom of boxed packaging untouched. From my pictures the seal residues on the box front are from how these units are stored before shipment, they seem to have been stacked on top of one another. Don't worry as those are not the actual box seals (just residues) as they are on the front of the box so don't be alarmed by my images. You will see from the back of the box image I provide, untouched manufacturer seals are in tact and untouched. Everything was included in each box; PS Vita Slim PCH-2001 unit with 1GB INTERNAL memory (NO individual card, it's not included in this boxed unit, sold separately), USB cable, AC adapter, AC power cord, 2 quick start guides in English and French with safety guide booklet. Both units had more than enough charge to start up and edit your desired settings. I purchase 2 units for both my husband and I to enjoy. I have been using the one unit since I received it and it works great for remote play using powerline wifi access point and adapter in our home. My husband setup the access point wifi in our master bedroom since our PS4 Pro unit is in our game room. Without his setup, we did notice terrible gameplay quality via remote play with just using simple private internet network. With the access point wifi in place, picture and sound quality is SUPERB on the PS Vita especially for its LCD screen. I can finally relax in bed and play my PS4 games while my husband reads his book or watches tv, and vise versa. The audio bluetooth capability of the unit also comes in handy. The one drawback to these units are the memory cards, they are expensive! I will mainly be playing with my PS Vita via remote play so I have no need for more than the internal memory that Sony has provided with the PS Vita slims. I did order an adapter memory card, but it did not fit properly on either unit. Bit the bullet and awaiting the PS Vita made memory card instead just in case for my husband's personal use with his PS Vita unit. Overall, the risk was high when purchasing these on Amazon and picking the right seller. I'm so happy I received what was advertised :)

Note: Purchased from Above All Games. YMMV with other sellers. For those concerned about what exactly they might be getting: I received a brand new North America PCH-2000 on 3.55 firmware, exactly as described in the listing. So far everything is working perfectly.

Absolutely love this PS Vita. I have owned a PSP, 3DSXL, Gameboy and Gameboy Advance - this one is definitely a PSP on roids. Very elegant The screen is amazing - large and clear (I did not see the original one with the OLED so cannot compare) The button placement and sizes are perfect for a handheld, it fits well in your hands, although I would recommend the Comfort Grip accessories if you were planning on playing for a long time in one setting (my thumbs get a little sore without one) Both the front and back touch screens are responsive and crisp Sound is not out of this world, but definitely on par. My only complaint about this is the Wifi - it does lose connection every so often even though it will show Full bars and 90% connectivity and I can be right next to my router. My 3DS never had this problem or any of my other wireless devices. It happens intermittently, but that's too often if you play online a lot (I do not). OK - one other complaint - the Proprietary memory card nonsense - Sony decided to go this route like the PSP, unfortunately - there are no adapters that I have found that allow you to use regular micro SD cards in this like the PSP had (eventually). Speaking of memory cards - don't forget one - I would suggest at least a 16GB one (about $30-35) to be safe - unless you like to download a lot and keep in on there - then go the 32GB route. Runs my PSOne classics from the PSN flawlessly and I actually prefer to play them on this than my PS3 (actually why I bought it). The game sizes (physical size) are perfect for portability. The games look amazing on this screen and no need to fire up the big boy TV or shut everything down when done - just hit the power button and put in standby, pickup where you left off in an instant. Accessories: I would definitely recommend the Vita Vault Case if you are into protection/storage - both Best Buy and Amazon sell it for around $20, Gamestop for about $25. I think even Target carries it in certain places. Screen protector would be a good investment too to protect that gorgeous screen Trigger comfort grips are a plus too. If you ever had a PSP and wanted to upgrade or are looking for a handheld that can play retro games, but also the current genre, this is the route to go. Battery life rocks - very important nowadays. Would definitely recommend

Just ordered this item from Above All Games for $224.99 at time of ordering in Apr 18, which was a little more than other sellers, but seemed worth the extra $15 or so compared to other sellers after reading the positive feedback from other customers for this product from this particular seller to have peace of mind in knowing what I was getting, compared to some of the other sellers selling this model or other models with high-speed colors where it was mixed bag of what you might receive (FW 3.61 or higher, items not in new condition or some people even getting old PSP models). After doing a lot of research on this particular item and contacting seller Above All Games (who promptly responded back to my inquiry about what FW version that their items shipped with), I pulled the trigger and ordered on Wed night and received Sat afternoon. Shipping wasn't quite the quoted 2-day shipping time frame by Amazon, but that may be due to me ordering late that night. Opened up the box of the PCH-2001 model, which was assuredly sealed on both ends to find a brand new black Sony Playstation Vita Slim Wi-fi with all items included (console, booklet, charger and cables). Powered on the console for the first time and now the moment of truth: everything powered on and did first-time set-up and check system version and it came with 3.55 FW stock! Why is this so important? Because if you want to play homebrew and other cool applications as well as back-ups of your physical games, you want to be able to have a FW less than or at 3.60 stock. This allows you to install CFW on your Playstation Vita and truly open up the possibilities of the console (emulators, homebrew games like a DOOM port and more). Now I'm running on CFW 3.65 Enso and playing all my games on a 128 GB microSD instead of lugging all my physical game carts around or paying for the pricey proprietary memory cards for the Vita. Be advised this model unfortunately doesn't ship with an included official Sony Playstation Vita memory card, which you will need if you're going to download any digital games as the meager 1 GB internal memory fills up pretty quick unless you're just using digital carts that require no patch installs (patches can be pretty big sometimes, too). If you're installing CFW 3.65 Enso or 3.60 Henkaku, you may be able to get by without the expensive Vita memory cards and buy an inexpensive SD2Vita adapter ($7-13 on Amazon) and a microSD, which have gotten relatively inexpensive for $/GB, especially on sale. The card with adapter goes into your physical game cart slot on the top and you're good to go. If you're going the official route, look for one used or pre-owned and you can find some decent deals on the Vita memory cards. Needless to say, I'm definitely pleased with the product and don't intend parting with mine anytime soon! Worth every penny to have a handheld this powerful with near PS3 graphics and such a huge library of games on the go in the palm of my hand. This product and the seller Above All Games come highly recommended! NOTE: I will update this review with photos and screenshots later.

But they're great games and you have a great handful of psp ...

I'm loving it so much. Thought I'd regret it after a while since I have a 3ds but it's more of the opposite. Some people say there aren't that many vita games and i can see what they mean by that. But they're great games and you have a great handful of psp and ps2 games you can download and I'm loving it.

The PS Vita is probably the first handheld system that I am completely satisfied with ( I think I have owned every one short of the Wii U handheld). The design of the device is very comfortable in my hands. I have carpal in my left hand and with the PS Vita I do not have issues. With other handhelds such as the Nintendo 3DS XL, my hand would go numb within minutes of playing. I also own the first version of the PS Vita with the OLED screen. I do not feel the visual differences are significant between the first version and this version. The longer battery life, 1GB storage and the standardized USB charging were the main reasons I purchased this version of the PS Vita. The power cord for the older model was a huge pain for me. I subscribe to Playstation Plus and find plenty of games that keep me entertained. I really enjoy the Indie games available. If this is your first purchase of the PS Vita system, I definitely recommend. If you own the first model, I would say you would need to weigh out the Pros and Cons and decide for yourself if it is worth upgrading to this system. If you own a PS4, then you will enjoy the added benefits of using the PS Vita with the PS4. But if you don't own the PS4, don't let that hold you up from purchasing a great handheld system.

It really is a good system and worth it!

I own an Xbox one and I wanted to play some rpg's but xbox doesn't really have any good ones. So I bought the Vita to play all my FF games and mega man games and this console is cool. Man I love the Vita, Idk why it didn't sell well, cause its pretty awesome.

Got my PSVita yesterday from All Above Games brand new out of the box. It came right on time for me with no delays. I was skeptical on ordering it from Amazon but after reading the reviews I decided to give it a shot. I wanted to be able to play The Sims 4 while I'm away at work & I can't wait to try it out this week. Definitely worth the buy.